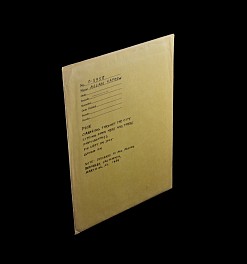 Known for creating a new form of performance art and coining the term ‘happenings,’ Allan Kaprow was born in Atlantic City, NJ. In the 1940s, he studied art at New York University and painting with Hans Hoffman at the Hans Hoffman School of Fine Arts. Initially pursuing a master’s degree in philosophy, he eventually earned an MA in art history at Columbia University.

After his studies, Kaprow began to make his own work and co-founded, with six other artists, a cooperative gallery called the Hansa Gallery which was located in the East Village in New York. Influenced by the work of Jackson Pollack, Kaprow made ‘action-collages’ from newspaper, straw, and wire, which he painted in a gestural style. In the late 1950s, Kaprow studied musical composition with John Cage at the New School for Social Research. Cage’s use of chance as a tool for creating work influenced Kaprow greatly.

From the late 1950s on, Kaprow no longer exhibited traditional paintings or sculptures.  Interested in the conceptual aspects of art, he instead created sculptural installations he called ‘environments’ and performance art pieces he called ‘happenings’ and he helped to establish a Fluxus art group at Rutgers University where he was teaching.  To document his happenings and other works, Kaprow created many inexpensively produced artist’s books. These books often included black-and-white photographs of a performance along with scripts or other text describing the project.

In 2007-08, a retrospective of Kaprow’s work organized by the Haus der Kunst in Munich, Germany incited new interest in re-staging his works. Kaprow’s pieces continue to be performed and re-invented by galleries and museums.