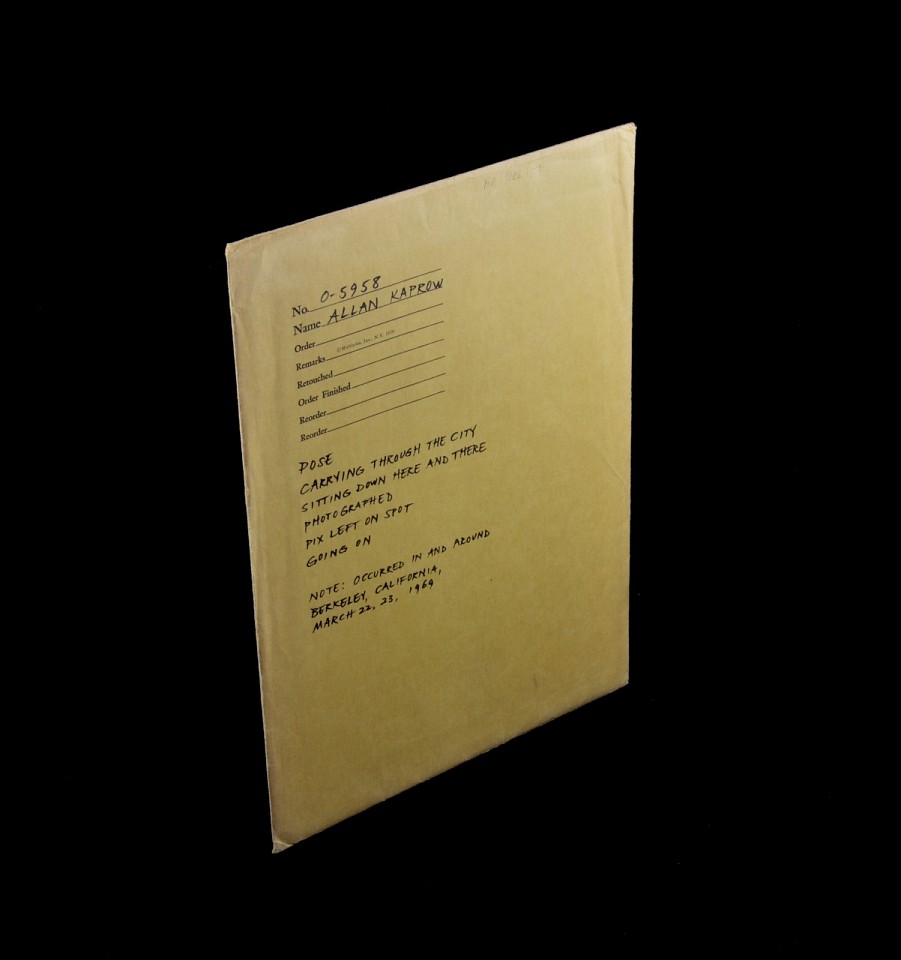 Allan Kaprow, Pose: Carrying Through the City: Sitting Down Here and There: Photographed: Pix Left on the Spot: Going On, 1970

This book is one of the many books produced by Allan Kaprow that photographically document his happenings. It was published as part of Artists & Photographs, a collaborative boxed set of artists’ books issued in 1970 by Multiples, Inc.  The complete set is exceedingly scarce at this point in time; the portfolio of works was set in a box designed by Dan Graham which contained books, objects, prints, and other materials of various dimensions by nineteen artists along with a text booklet by Lawrence Alloway.  The set was published by gallerist Marian Goodman in conjunction with a 1970 exhibition that explored how contemporary artists, including Douglas Heubler, Allan Kaprow, Joseph Kosuth, Sol LeWitt, Robert Morris, Bruce Nauman, Dennis Oppenheim, and Ed Ruscha, were using photography in their work.

Pose was a happening that first took place on March 22 and 23 in 1969 in and around Berkeley, California. The full title of the book explains the script for the event. Kaprow and his collaborators carried chairs through the city, stopping every now and then to sit on the chairs and pose, and taking photographs that they then left in the spot where they had posed. Since it was originally performed, Pose has been re-staged in various contexts – notably in conjunction with a 2008 retrospective of Kaprow’s work at the Museum of Contemporary Art in Los Angeles.

Documenting the original performance, this book contains seven loose sheets, each featuring two or three black-and-white photos of the event reproduced by offset lithography. Some of the photographs show the participants sitting in chairs while others show the photos that were left on site. The photographs document the random, spontaneous nature of the happening, such as showing participants sitting in chairs that are perched on train tracks or balanced in a tree.

Allan Kaprow | Pose: Carrying Through the City: Sitting Down Here and There: Photographed: Pix Left on the Spot: Going On | 1970 | BOREAS FINE ART
Tip: You must first enter a valid email address in order to submit your inquiry