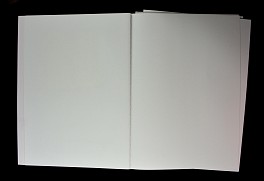 Jacob Kassay is a painter, sculptor, filmmaker, and printmaker who lives and works in Los Angeles. He studied at the State University of New York, Buffalo, where he received a BFA in photography. He has garnered acclaim for his monochrome and mirror-like silver paintings that take inspiration from the work of earlier artists such as Robert Ryman and Lucio Fontana.

Kassay’s work with printmaking includes a recent series of portfolios published by Polígrafa Obra Gráfíca in Barcelona. Each portfolio is based on the pages of a different international newspaper, for example Untitled (Le Monde) (2013), which features seven lithographs. Kassay has also created a limited edition artist’s book known variously as Jacob Kassay, Untitled, or Sanded Edition (2013). For this work, the artist redacted one of his own exhibition catalogs to eliminate all the text and images.

Kassay has had solo exhibitions at the Institute of Contemporary Arts in London (the catalogue of which formed the basis for Sanded Edition) and Collezione Maramotti, Reggio Emilia, Italy. His work can be found in the collections of the Museum of Fine Arts, Boston, the Rachofsky Collection, Dallas, and others.