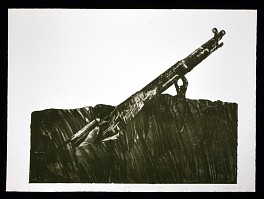 Born in Toledo, Spain, in 1935, Canogar is a renowned painter, sculptor, and printmaker who studied with painter Daniel Vázquez Díaz.  Canogar was also influenced by the art of Georges Braque, Pablo Picasso, and Joan Miró and his work evolved from figurative painting early in his career to expressive, abstract Informalism in the 1950s. In the 1960s, Canogar created figurative paintings and sculptures that differed from his early representational work in their style and subject matter. He returned to abstraction beginning in 1976, creating colorful, geometric compositions.

Canogar has been a particularly prolific printmaker and his graphic work has been the subject of many retrospectives over the years. His notable graphic works include The Earth (1969) and La Violencia (1969), two portfolios of lithographs that he created at Tamarind Lithography Workshop in Los Angeles. Later he contributed to Declaración Universal de Derechos Humanos (1984), a portfolio of prints that included works from artists such as Robert Motherwell and Rufino Tamayo. His collaborations also include Cinco espacios para Rafael Canogar (2004), a print portfolio with poems by Miguel Ángel Muñoz Palos.