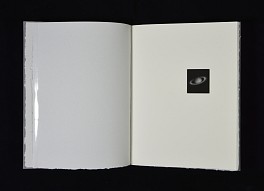 Vija Celmins is an American painter, printmaker, and sculptor. Born in 1939 in Riga, Latvia, her family fled to eastern Germany in 1944 and, by 1948, to the United States.  Early in her career as an artist, Celmins began to take photographs to use as the subjects of her paintings and she has continued this practice to the present day.  Her most famous works feature views of the ocean, the night sky, the surface of the moon, and other natural scenes in a monochromatic black palette. Notable for their intensity and their lack of a horizon or point of reference, her highly detailed, realistic works explore the formal aspects of making images.

Celmins has created prints since the early 1960s. Over the course of her career, she has used a variety of techniques, including etching, wood engraving, mezzotint, and lithography.  Her graphic works also include a few important artist’s books. The Stars (2005) is a book with a text by Eliot Weinberger and three etchings by Celmins, who also designed the book, and The View (1985) which features mezzotints by Celmins and poetry by Czeslaw Milosz.

Celmins received an MFA from UCLA in i965.  She has received many awards during her career, including an American Academy of Arts and Letters Award (1996) and a John D. and Catherine T. MacArthur Fellowship (1997). Her works are in the permanent collections of the Museum of Modern Art, the Metropolitan Museum of Art, the Centre Georges Pompidou, and others. In 2018 and 2019, her work will be the subject of a retrospective organized by the San Francisco Museum of Modern Art and the Met Breuer.